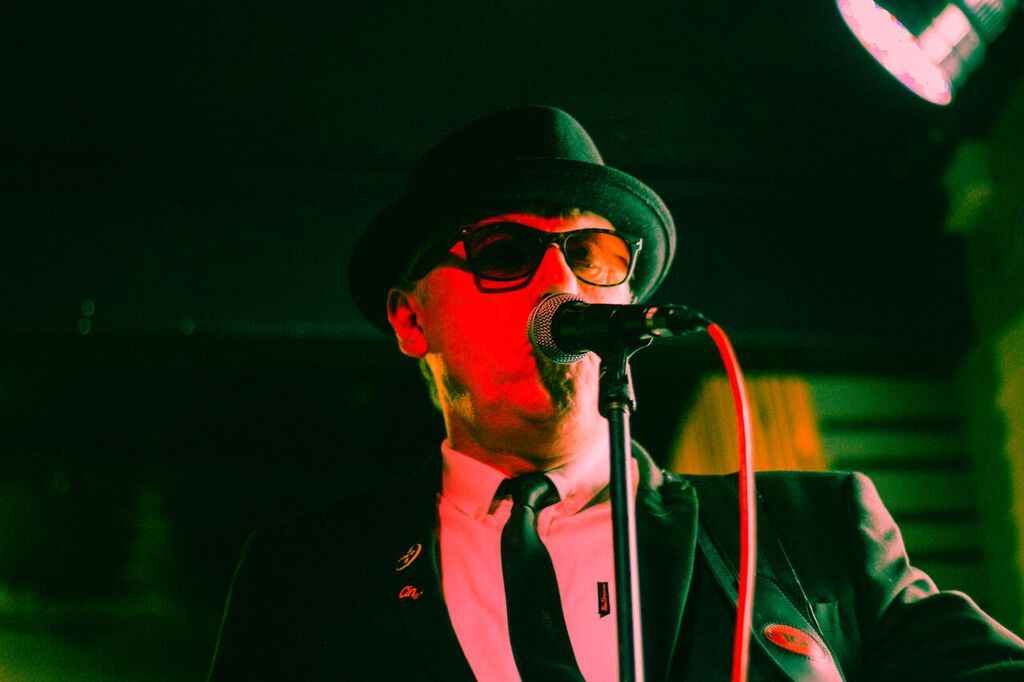 Department S are back playing gigs for what is now the 9th year since they reformed. Current line up features the legendary Mike Herbage, Eddie Roxy and ex PiL, Cowboys International, Brian Brain bass man Pete Jones…along with new guitarist Phil Thompson (who also plays for Bug) and Alex Lutes on drums (who’s past credits include FMB and Night Nurse).

“The quality and consistency are excellent”

Department S evolved from a previous punk/ska combo, Guns For Hire, and featured former Madness drummer John Hasler, Mike Herbage joined them and wrote Guns For Hire’s only single – “I’m Gonna Rough My Girlfriend’s Boyfriend Up Tonight” which emerged on the Korova record label The group then became Department S, with the addition of Eddie Roxy and Stuart Mizon.

They debuted at London’s Rock Garden on 24 September 1980. Their first single, “Is Vic There?”, was released in December 1980. It was produced by former Mott the Hoople members Buffin and Overend Watts, and reached number 23 in the UK charts aided by 3 appearances on Top Of The Pops.

The group recorded a session for the legendary DJ John Peel on 3 December 1980. The tracks laid down were “Is Vic There?”; “Age Concern”; “Ode To Cologne (Stench Of War)”; and “Clap Now”.

The follow-up single “Going Left Right”, was released on the Stiff Records and hovered for a while outside the top 30 whilst the third single “I Want” didn’t sell well in the UK but was a hit in many European markets. Differences of opinion with their record label, resulted in the band being dropped by Stiff, but not before £50,000 was reputedly spent on what was to be their debut album, Sub-Stance (subsequently released on LTM in 2003).

Toulouse later worked as a DJ under the name Main T, before recording as a solo artist with a 1985 single “Fickle Public Speaking”. Eddie Roxy had some European success with his band Dream Sequence with a single called “Outside Looking In” and Michael Herbage played with The Purple Hearts.
The band reformed in 2007 with original members Herbage, Mizon, Taylor and Roxy. The later took over the role of vocalist as Vaughn Toulouse had died of Aids in 1991. In February 2007, Department S recorded their first new single for twenty six years, a cover version of Alvin Stardust’s 1973 hit “My Coo-Ca-Choo”. Since then there have been a number of subsequent releases, including the well received LP “Mr Nutley’s Strange Delusionarium” with the addition of Sam Burnett (ex Back to Zero). Department S have built up a reputation as being a must see live band are to be found playing festival dates across Europe including Glastonbury, Benicassim, Rebellion, Rewind, Great British Alternative Music Festival and Sinner’s Day.

Their 2010 single “Wonderful Day” featured on a TV commercial and had guest appearances from Marco Perroni and Glen Matlock. In 2013 Mark Taylor stepped down as bass player and was replaced by Ex Public Image Limited/Brian Brain/Cowboys International bass man Pete Jones. 2014 saw them gigging in Amsterdam, Brussels, London and Blackpool to name a few.

“I’ve used Rotosound since I saw Chris Squire using them. The quality and consistency are excellent”